Learn fun facts about our local geography by continuing to check back to this page!

Below are several pictures taken in Watseka. They represent the effects glaciers had on the land. 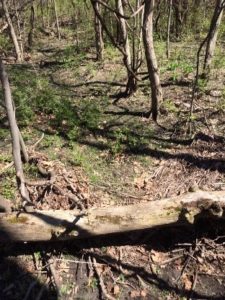 Oxbow- river changed its course representing eroded soil where it once flowed due to the meandering streams. The green path was where the creek once flowed. 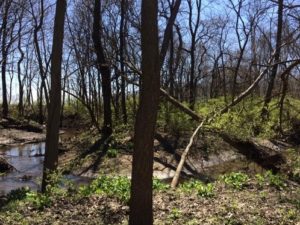 This is a meandering stream because a glacier leveled the ground. Therefore, there is no downhill force to make a straight river. Once the water hits an obstacle, it changes its course. 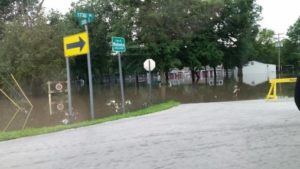 July 2015 flood in Legion Park. Watseka has been affected so many times with flooding. When the glaciers moved across this area, it dug deeper creating a “bowl effect” which developed into Lake Watseka when the glacier melted. 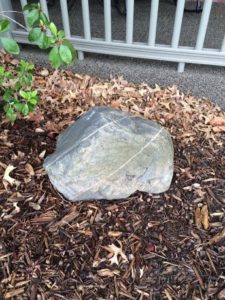 Erratic-nonnative rock to this area brought in by a glacier. Rock could be from Canada, Wisconsin, or Michigan. This is an igneous or metamorphic rock. The markings on the rock are from the glacier and other earth material scratching it as it was being bulldozed. 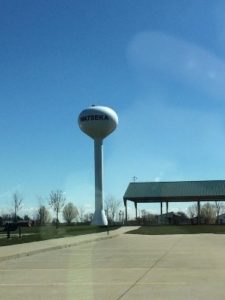 Top of the water tower is ground level with Sheldon, a town approximately 10 miles east of Watseka. 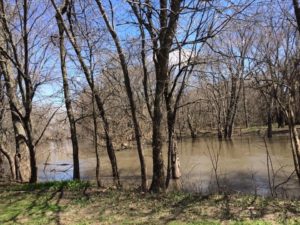 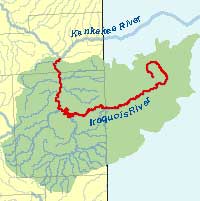 The Iroquois River is a 103 mile tributary of the Kankakee River, starting in Rensselaer, IN and ending in Aroma Park, IL. Via the Kankakee and Illinois Rivers, it is considered to be part of the Mississippi River watershed which flows into the Gulf of Mexico. The Iroquois River has a 2,091 square mile basin (water that flows into it).  French explorers were in the area in the mid to late 1600’s and called the area where the Iroquois River met the Kankakee River La riviere des Iroquois. It was possibly named for a location where the French and French allied tribes had an encounter with the Iroquois. It is also along this river that Gordon Hubbard set up his trading business in the early 1800’s as Iroquois County was developing.

Many centuries ago the glaciers scraped through this area leaving behind glacial till. Glacial till is very fertile soil which is why we are the world’s greatest farming area. Iroquois County consists of 681,289 acres of farmland which is similar to 516,000 football fields. This ground produces $420,538,000 of farm products including corn, soybeans, and livestock.

Statistics are from the USDA.

Iroquois County State Wildlife Area is situated in a low glacial outwash plain associated with the Kankakee River Valley that consists of marshland, sand ridges and dunes. The initial acquisition of land occurred in 1944 for the purpose of protecting Illinois’ declining prairie chicken population. Prairie chickens did not survive and public hunting became the major use. The state purchased an additional 560 acres in 1984. Known as the Hooper Branch Savanna, 480 acres of this parcel is considered the largest single tract of rare native savanna remaining in Illinois. The total acreage at Iroquois County is now 2,480.

The area is located 2 miles north and 3 miles east of Beaverville, in the extreme northeast corner of Iroquois County, about 80 miles south of Chicago. The majority of the area, 2,000 acres, is managed as a public hunting area. The remainder is a dedicated nature preserve. Nonconsumptive recreation, in the form of hiking and nature study, is available when the facility is closed to hunting.

Information is from the Illinois Department of Natural Resources. 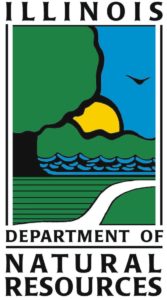 Water from the melting Valparaiso glacier began flowing through the Kankakee Valley via the Iroquois River into what was called Lake Watseka.  As you drive around the Watseka area, you can still find sand hills that would have formed the edges or beaches of the lake. 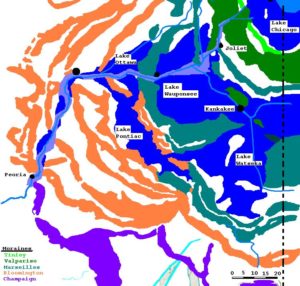